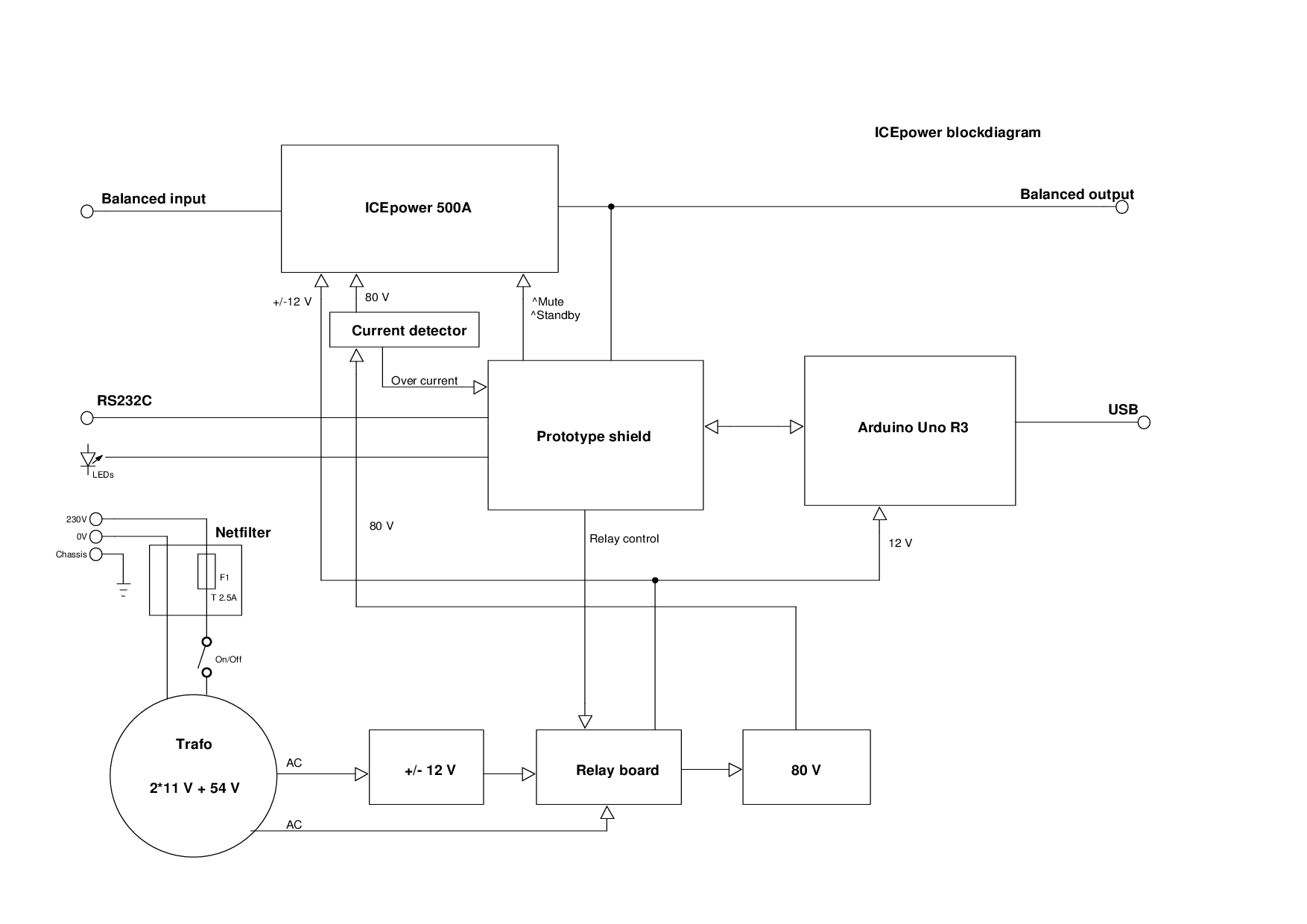 The block diagram shows the major building blocks and most of their interconnects.

The ICEpower module is an amplifier with balanced inputs and balanced outputs. It can delever 500 Watt of continous power with peaks exceeding 1,600 Watt.

It is power with regulated +/- 12 V and unregulated +80 V (Vcc). Under normal conditions the output terminals will have an average af Vcc/2 or 40 V. Power is delivered via a relay board that is controlled by the Arduino.

The amplifier has two control inputs: ^Mute that mutes the output and ^Standby that controls the 500 kHz switching of the output transistors. According to the specicfications it is possible to go into Standby within 1 uS. This effectively turns off all output transistors and is much faster than any relay and an importsant part of the protection schema.

+12 V is send to Arduino which is the first circuit to power up.

Power to the amplifier is controlled via 3 relays on the relay board. Relay 1 sends +/- 12 V to the amplifier. Relay 2 sends AC from the trafo to the rectifiers in the 80 V supply. Relay 3 is for soft turn on, it shorts a resistor that reduces load current to the 80 V capacitor bank. Driver transisitors for the relays are placed on the relay board and input to the driver transistors comes from digital pins on the Arduino.

The amplifier modules has some small capacitors build in. They can deliver a limited amount of current that cannot be detected untill current begins to flow from the larger capacitor bank. Hopefully this little energy will not cause permanent damage.

The Arduino (Uno, R3) has 6 analog inputs and 14 digital inputs/outputs. The Arduino gets its power directly from +12 V and is always on. During development it is connected to a PC via an USB connector. All other connections goes through a prototype shield.

The prototype shield takes care of signal conditioning. It contains attenuators (1:20) as input to the AD-converter. It contains buffer transistors for ^Mute and ^Standby and it contains resistors for the LEDs.

Status i displayed via two LEDs:

There are two external connectors: